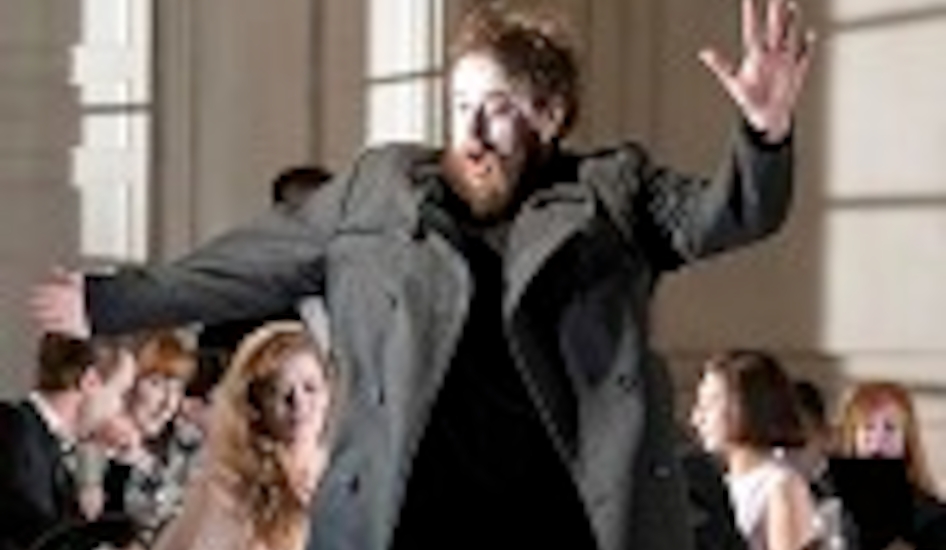 Act I. Elsinore, Denmark. King Hamlet has died, mourned by his son, Prince Hamlet of Denmark. The king's funeral is followed fast by the marriage of his widow, Gertrude, to his brother, Claudius.

Tweet Facebook
Act I. Elsinore, Denmark. King Hamlet has died, mourned by his son, Prince Hamlet of Denmark. The king's funeral is followed fast by the marriage of his widow, Gertrude, to his brother, Claudius.

Hamlet is deeply disturbed by his father's untimely death and his mother's "o'er hasty marriage," a state aggravated by the appearance of King Hamlet's ghost, informing Hamlet that he was in fact murdered by his brother, now husband to Gertrude and King of Denmark. The dead king asks that his son avenge his death by killing Claudius.

Unsure what to do and behaving erratically, Hamlet rejects his soul mate and lover, Ophelia, and dismisses his former classmates, Rosencrantz and Guildenstern, whom Claudius has summoned to Elsinore to help discover the cause of Hamlet's apparent madness.

A group of players arrives in Elsinore. Hamlet asks them to perform a scene mimicking the murder of King Hamlet by his brother. Claudius reacts violently to the performance, proof in Hamlet's eyes of his stepfather's guilt. Called to his mother's chamber to explain his actions, Hamlet comes upon Claudius deep in prayer, yet finds himself unable to kill him.

Once with his mother, Hamlet hears a muffled cry and, thinking that Claudius is spying on him, runs his sword through a tapestry, killing the unsuspecting Polonius, Ophelia's father. Hamlet then berates his mother for her shamelessness and debauchery. His father's ghost appears, reminding Hamlet of his primary mission to avenge his death.

ACT II
Laertes, Polonius's son, returns to Elsinore to avenge his father's death, threatening Claudius and his kingship. Claudius manages to allay Laertes's violence by convincing him that Hamlet is the guilty one: Together, Claudius and Laertes conspire to kill him.

Ophelia appears, apparently driven mad by Hamlet's rejection and the death of her father. This only serves to harden Laertes's resolve for vengeance, as does, moments later, Ophelia's death—she has drowned in a nearby stream.

Hamlet and his friend Horatio happen upon Ophelia's funeral, and upon learning of her death, Hamlet provokes Laertes.

Through the intermediaries Rosencrantz and Guildenstern, and according to the plan concocted with Claudius, Laertes challenges Hamlet to a duel. Hamlet accepts the challenge.

Many deaths ensue.
Gå til
Skråfoto